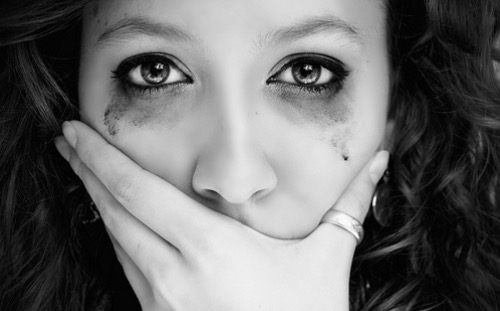 9 ways of abusive relationships - are you stuck in one?

A bruise, a puffed black eye, messed up hair and a broken soul – isn’t that the picture that conjures up in your head when someone says ‘abusive relationship’? Films like Provoked, Daman and Lajja have taught us that.

But is that all? Is physical abuse the only abuse that matters? What about a relationship where there is neither hitting nor shoving, no degradation or cussing… but emotional abuse. Abuse where you are manipulated, because of the power of love your partner has over you, because of the threat that the love can be taken away, because you fear losing the love.

Finding out if you are in an abusive relationship is the first step you gotta take. Here are 9 ways he could be abusing you:

1. He is pro-commitment, a little too pro

Exclusivity in a relationship is a stage achieved with time. Every couple reaches the point at their own pace. A mental abuser will however push for involvement and commitment. Pressurizing the partner into a commitment by tall claims of a strong love never experienced before is a common phenomenon. Did you get pushed into it?

Do you feel like you are walking on eggshells? Does your partner go off suddenly? One minute things are fine, you are spending quality time together and the next minute something you say sets him off… the fight escalating with no end point. Are you never sure when or what will trigger him, and have you started being careful around him, because you do not want to spoil your time with him by setting him off?

Well, he sets off suddenly, but that’s not it. He sets off because of your actions. Something that you said or did or didn’t do. Mental abusers play the blame game – someone else is responsible for everything that goes wrong. The blamed could be anyone – you, his parents, his boss…

It is common for them to make you believe that you aren’t worth more or better, that the abuse is justified by your mistakes and that you completely deserve it. Has he led you to believe that somehow every wrong thing is your fault?

4. Your world revolves around him, only him

It is normal in a relationship to have your world revolve around your partner. However, having relationships outside of the relationship is important too. That’s not how abusers feel! An abuser would want you all to himself. He might get jealous at nothing and you might find it sweet in the beginning. Making you feel guilty for spending time with anyone apart from him, be it your friends or your family, could be a start. And obviously, his reason for it would be that he loves you so much that the idea of sharing you with even your family is unbearable. And, your world starts to revolve around him, only him.

But. Don’t fall for it. It’s isolation, not love. Someone who truly loves you will want you to be connected with your people.

5. Jealousy, possessiveness and interrogations are suddenly common to you

He asks questions. About your whereabouts, about who you were with, how you know that guy, why you were flirting with him… out of concern and because he loves you. He loses himself to jealousy and possessiveness because he loves you. He’s controlling because he cares about you and doesn’t want you to get into harm’s way. Those are excuses, not reasons. With love, comes trust, and it should.

A wise man once said that anything that comes before a ‘but’ doesn’t really count. May be. May be not. However, when it comes to mental abusers, he will use “I love you, but…” as a weapon; continuing with a threat to make you obey… because he knows it can help him control you. It gives you hope for the relationship and he knows that you’ll cling to it. The threat of taking away his love if you do not behave the way he requires you to is part of the dynamic and the cycle of abuse.

Do you feel like what you do is never enough? You are put down, no matter what? For an abuser, having power over you means the world. Stripping you off your self-esteem is the easiest way to wield power over you. Once you start believing that you can’t do better than him, he has won half the war.

8. Deafening silence doesn’t matter to him

Have you stopped speaking up because you do not want to ruffle his feathers and instead have just started staying silent? You do not want to affect the relationship, and that’s great. But isn’t this relationship already affected? You can’t be yourself and express your feelings in your relationship… what more could go wrong?

With love comes respect and with respect comes love. If you feel disrespected but still are choosing to be with him because of the love you have for him, let me be clearer for you – he does not love you. And if my words make no difference, look yourself in the mirror and answer this simple question – is HE fit to father your child?

Falling in love doesn’t mean the guy or girl is right for you. And, falling in love with the wrong person doesn’t mean your life is over. This part of him, the part that you have been led to believe comes out because of the mistakes you do, it’s just the way he has been built. It’s called character! And nothing you do or don’t can change that.

All you need to do is tell yourself that you are strong. Accept that the relationship is beyond saving and that every minute you spend trying to fix it is only going to suck you in deeper. It is human tendency to want to fix the relationship, giving up isn’t great, but is it worth harming yourself? Sit, think, decide. And, if… take that step before it’s too late.