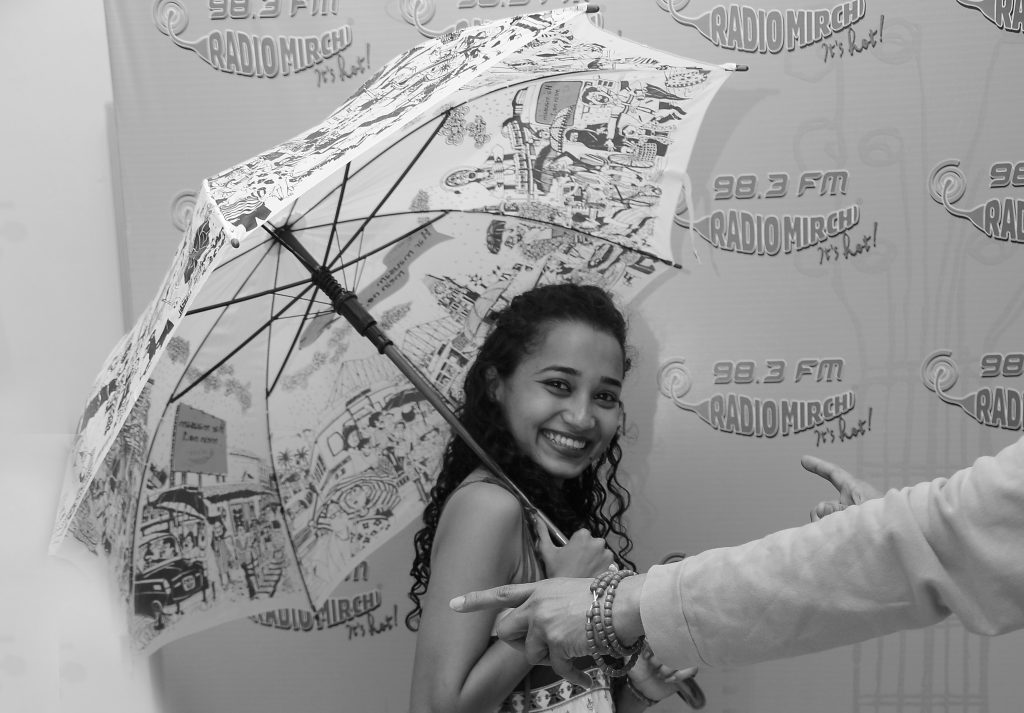 That early morning hustling in the house… that sleepy me fighting with my brain to not wake up… and to wake up… Mom’s persistent voice hurrying me… and yet, me taking breaks in the middle of all the maniacal rushing to listen to the voice booming out of the radio perched on the kitchen platform. The voice! The Mumbai ki awaaz! I vividly remember me scurrying every time a song would be played, rushing through the chore so that I could be back in the kitchen before the song ended, not wanting to miss whatever he said.

Mom hated him – though I truly doubt it. No one can hate Jeeturaaj! Nah, correction – no one can not love Jeeturaaj! I think her theatrics were probably her lame attempt at trying to disengage me from him, trying to get me in school on time!

But, me? It didn’t matter what she said. Because Jeeturaaj was a necessity. An obsession. An aadat. My day wouldn’t begin without him – it couldn’t. I wasn’t just in love with Jeeturaaj or his voice. I adored him. I was in awe of him. He was someone I believed worthy of being put up on a pedestal. And, do not mistake me here! Not just because he was a radio jockey or a celebrity or something fluffy like that – but because everything that he spoke made perfect sense. He was loud & boisterous, but caring and empathetic. His beliefs were strong, very strong, but isn’t how it should be? He was vocal about his thoughts, not thinking twice before saying something out loud, which spoke volumes about his confidence, his persona. At the ripe age, he was the one who made me ready for the real world, gave me confidence to love myself, gave me the courage to speak up when I saw wrong, made me realize the importance of people & relationships, and knowingly unknowingly shaped me.

So when I got “the call” – the call that in a way changed my life – the call that told me that RJ Jeeturaaj wanted me in his studio the next morning – the call that made my head go dizzy and made my fingers pinch me just to ensure that I wasn’t dreaming… I jumped!

Not figuratively, not as a manner of speaking, not an exaggeration. I was bouncing around in the house, literally. And as suddenly as I had started to jump around, I stopped. The realization hit me – I was not only going to be recording for a radio show (which in itself is a big big biggg achievement! And also scary because everything I spoke the next day could be heard by all of Mumbai!) I was going to be recording for Jeeturaaj’s show, seeing him, meeting him!

For all you people who think that it’s not that big a deal – go to hell! I was panicking, like proper panicking! Trying to imagine what Jeeturaaj looks like… wondering what he would ask me… would he be nice to me… or would he be all airy & hoity-toity! I knew he had read True Liars… that had been evident in his whatsapp messages. But had he actually liked it? What if he hadn’t like my book? What if woh meri puri izzat utaar de? Knowing him, I knew he wasn’t someone who just acted nice! What if he tries to strip me? What if, what if, what if!

My mind was ranting away… giving me ideas, each worse than the previous one! And as you can imagine, I reached the Radio Mirchi office with dark circles the next morning. The worst part – I don’t know to use make-up. I know a lotta women in my life who can cover their dark circles and marks and what-nots easily. But me? I always laughed at them and told them – I like my natural look better! Bit my ass right back!

So… me plus dark circles minus make-up reached the Radio Mirchi office and sat, waiting at the reception. The receptionist asked me if I was there for the intern’s interview, and I chuckled. Yea yea, not her fault! I do look like a 21-year old just-outta-college-kid! But hello! Smiling grandly at her – I think it’s a gracious grand smile that I have, but I have often been told that it is more goofy than grand! – I told her I was here to see RJ Jeeturaaj and sat back to wait for him, trying to not rock my feet or wriggle my hand. Didn’t want another soul to see my nervousness.

Gotta tell you this – the office is beautifully made! Quotes, posters, standees, lotsa colors and then all those extremely cool & busy people walking around..! Awe-inspiring!

After a few minutes, a guy led me into a plush huge cabin and asked me to make myself comfortable. Could I tell him that I wasn’t even comfortable in my skin right now, forget the cabin-shabin? I smiled and declined his offer of tea & coffee & cake. Wait! Cake? Early in the morning?!?!?! Kuch bhi karte hai ye log toh yaar, I thought! He still got me a plate full of the cake and I smiled at him, again. One look at it, and my stomach churned! I hadn’t been able to eat anything since “the call”! I sat back, trying to practice my smile – not too much & not too little, I had been told, but my smile kept faltering. I was mainly practicing the smile because I didn’t wanna look stupefied by him.

Gulping water in an attempt to wet my arid throat, I sat staring at my feet. For all those people who do not know me – since school, I have been the kid that participates in everything, who can take the mic in hand impromptu and handle herself pretty well, the kid who had never experienced stage fright or nervousness. And hence, I didn’t know what the fuck was happening to me! (Oops! I said “fuck” in my blog. But yeah, no other word can do justice to that emotion so fuck it is!)

The door opened and I skipped a heartbeat. I remembered waiting for the school Principal in her cabin once, listening intently for footsteps, staring at the door, and looking away if the door started to open as if I hadn’t been waiting for her at all! It felt almost the same – the fear, the headrush, the anticipation, the worry. The door opened many times – mostly because different housekeeping guys were checking up on me and trying to feed me that cake. Argh! The cake.

I finally took a small bite of the bloody cake and something legen-wait-for-it-dary happened… it just melted away! The yum cake just melted in my mouth! Hungrily, I took another huge bite of the yummiest cake I had ever eaten – and that was the moment Jeeturaaj chose to walk in! Damn the bloody (extremely yummy but fucking bloody) cake!

In my embarrassment of having my mouth full, I totally forgot I was nervous. I smiled looking at him – not the smile that I had practiced, not the one I was supposed to give him, but a smile straight from my heart. He sat on the couch opposite me, and spoke to me as if he was the one who had been excitedly waiting to meet me for the past few days, as if I was the center of his attention, and he was just he, as if I am the cool composed one and he was the ‘me’!

And finally, after what seemed liked forever, I took a normal breath!